With every tap of the beat on the drum, it is an invitation, to a marvelous journey. The sounds of the drum encapsulate a joyful invitation to a musical expedition to a world full of rhythm.

Kasiva Mutua aka kasingoma or percussiva has harnessed this majestic instrument- enabling many of us to be in and hear stories expressed through this enchanting rhythmical space. 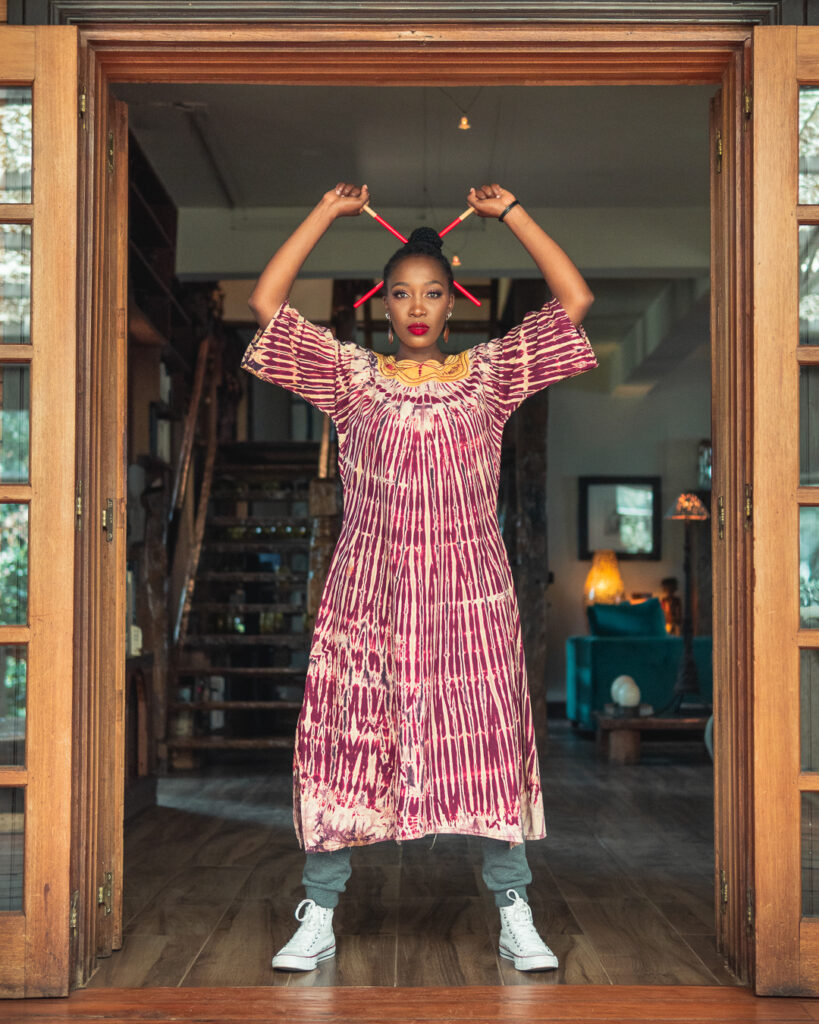 “Shelly, hey it’s been a minute, come for tea tomorrow at 4pm. I have something exciting I am working on with Jägermeister”. Kasiva messages me. I was fortunate to experience this; it was among the few sessions where she was preparing to embark on a journey as a recording artist – a new fond chapter that would lead to the new project.

At the meet up, we are joined by guitarist, Tugi Mlamba and vocalist Shitaqua. I take a moment to admire her wonderful abode, filled with an eclectic mix of colors and patterns. Every corner of the various rooms had pieces of little artefacts she has picked over her tour life.

What I adored was the dedicated bedroom for all her percussive instruments. At the time of the interview, Kasiva has over 25 drums and 70 shakers in the room – a devoted percussionist I would say.

Her front patio where we sat was well manicured layered with various plants and flowers. “A little secret about me, I am a proud plant mum”. Kasiva admits.

During the virtual live session, the crowd is electrified by the amazing display of raw energy. The carefully planned program built in intensity, broke up by a couple of well-paced numbers but never diminishing in excitement.

In between, we would talk and she would make her way back to the drums and plunge into the next number with long, mood-setting cadenza.

What made this live show special incredible was the source of energy; she was the one urging each player on, exhorting the vocalist to the point where you couldn’t take your eyes off her.

She thanks all her online fans for joining the live session.

The beginnings – Tales from her grandmother:

We are offered tea and mandazi and she narrates her musical background.

“I grew up a curious child. I enjoyed listening to my grandmother’s stories, my grandmother, whom I am named after would tell her to go outside and listen to nature, “Listen do you hear that?” “Listen to what the birds chirping outside are saying, the cows, the wind, listen?”

“I listened carefully to every sound; bird calls, cricket chirps, cowbells and traditional drums are embedded in my mind”.

“As tradition, most evenings my sister and I would recline by the fire and listen to stories narrated by our grandmother. She would sit with a drum between her legs and narrate tales of our culture and tradition. A slow introduction to the language of the drums. Grandma introduced me to drums and shakers, celebrating our Kamba community’s spirit and also imparting moral guidance”.

These were Kasiva’s formative stages of appreciating nature, and how to interpret that into a musical language. She replicated the sounds on her thighs, chests, whistles, home crockery like spoons, plates, cups. “In High school, I was such an OG, I could play on buckets” we all laugh as she reminisces her school days. She studied in BuruBuru Girls’ Secondary, Nairobi. It was in high school she got good exposure to the drums.

The making of percussive: a roaring percussionist

In her later years, Kasiva has grown to be an internationally touring drummer and percussionist based in Nairobi, Kenya. Her exuberant performances reflect a panoply of influences.

Kasiva sips her masala tea as she explains what has now embodied as a percussionist. “A percussionist is any person who plays a percussion. A percussion is any instrument that you beat, shake, or rattle to produce a sound –drums shakers jingles rattles, or anything that recreates a certain percussive sound”. “I have beautiful instruments in this bag, shakers, rattles, a little frog when you strike it replicates a frog croaking, wind chimes, quite soothing and tingling melodies”.

When I play music, I imagine myself as an artist with a plain canvas, these instruments are my paints and the stories are the color that add up to curate a beautiful artistic muse. How I create music is affected by different energies and moods, vibes l would add. How I am feeling…I will express that how I am playing.

All these feelings and emotions are channeled and greatly affects how she plays, “the rhythm I will play, how I will touch and strike the drum,”

The percussionist transitions into the recording space

The opportunity to express and veer myself to be a recording artists was mainly pushed by good musicians and comrades such as Mackinlay Mutsembi, Tetu Shani and Fadhilee Itulya. It is beautiful to be surrounded by musicians who see a potential and want to see you blossom and grow.

It was a daunting decision to make, she admits she is the happiest she has been. The results are beautiful and the music is excellent.

Going on her own solo mission may have sparked fear, she has grown to understand, fear and anxiety will always be there especially when it comes to people’s opinion.

Moreover, she felt the need to touch base with the traditional sounds, as the popular culture had slowly made the sounds fade away. Through her life experiences as being a percussionist, she has also seen a rise in more women wanting to own and play the drums. 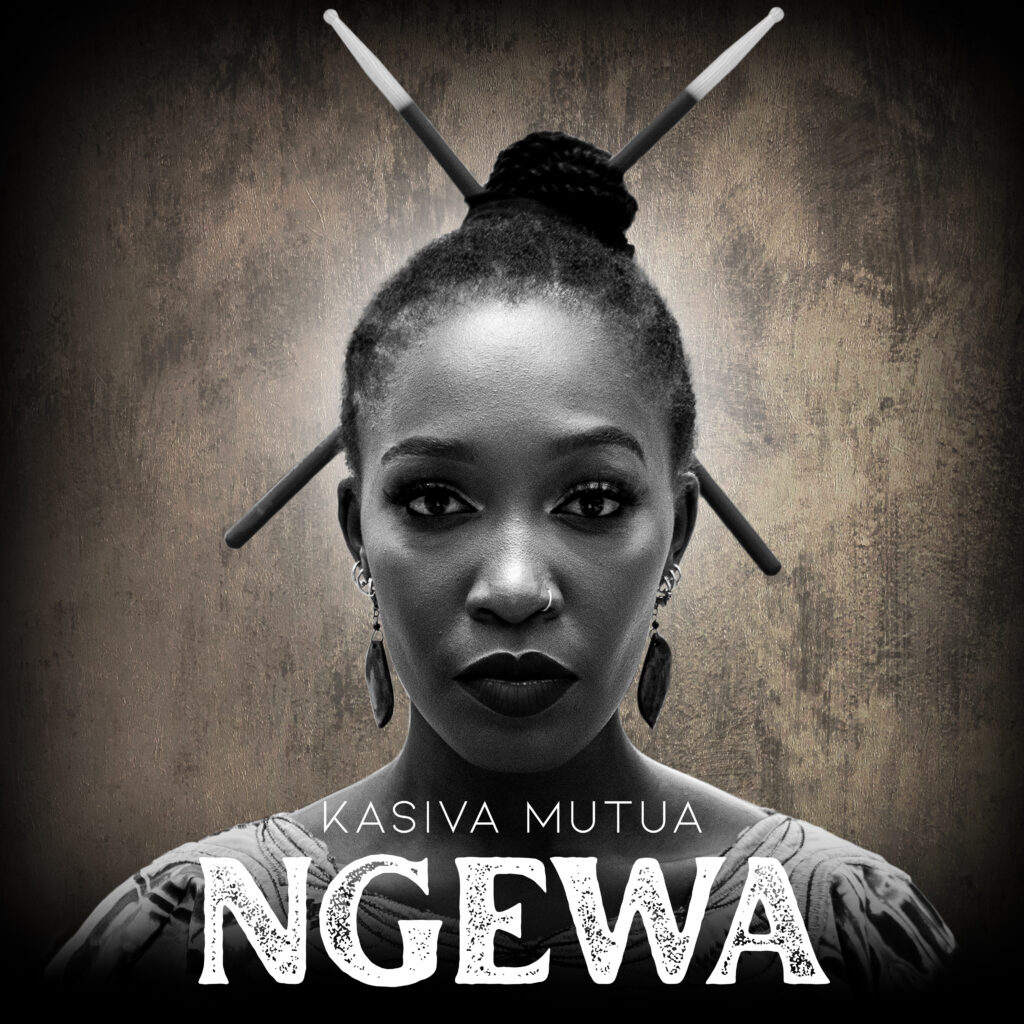 It is her debut project, a roaring masterpieces of beautiful stories she has picked though her life experiences. “There is always doubt. It is like giving something or a part of yourself to. You are scared about the people’s response to it”.

She had recalls going through anxiety, “It felt like a ball of emotions. I cried, I didn’t know what would be the outcome”.

NGEWA, the EP, starts with track Bantu with the Kayambas, shakers, birds chirping and heavy syncopated beats on the drums, we commence on a 15-minute journey with tracks like – Hakukole, reflects the Hawaiian art form of poetry and song that was used to ridicule a person in a sarcastic way.

Fascinating tales of women and their role in society, with tracks like Bam Chikicha.

Kasiva recalls of a time she went on tour and a man asked an awkward question and made her doubt her role as a musician especially as a female one. She grew up hiding her curiosity on the drums, she felt at the time it was ‘wrong’.

The drums are so iconic of Africa. Music is deeply woven into the fabric of African life, and drums are the primordial musical instruments. Traditionally, the drums were dominantly played by men.

“Women can be custodians of culture too, we are inherently nurtures”, I am bold, I use my drum to tell my story and my people’s stories, my roots shaped me and my culture is here to stay with me.

She acknowledges the scene has blossomed to be more accepting of women playing particular drums that were unconventional for them. She formed MOTRA, a space/collective where she imparts her knowledge on percussion to other aspiring musicians to also appreciate playing the drums.

In Ngewa, Bam Chikicha unfolds these stories, “I composed the piece to celebrate spaces women have created for themselves, to interact, to inspire, to protect each other, to network and freely exist as women in their femininity or anyone who identifies within this binary gender group. 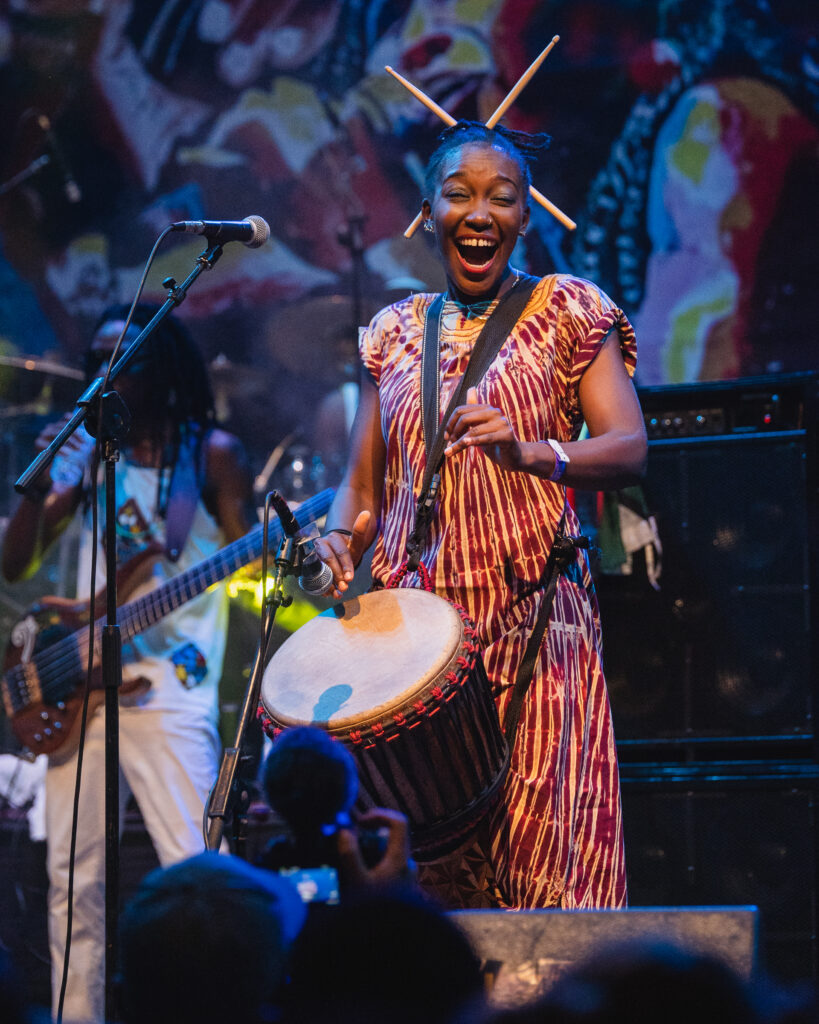 Kasiva has grown such acclaim, even getting a sumptuous meal named after her, KASIVA’S MUSHROOM BLACK PEPPER CHICKEN available at Ankole Grill.

All in all, “Time is rhythm…Drumming is not what I do, it is who I am”.

Beneath the Baobabs Live: A Kenyan live music experience in Kilifi