Behind an assuming door, lies Dagoz; a tiny unique space that comes off like a dive bar. Since its inception in 2018, it is one of the busiest live music spaces in Nairobi; offering a 5-night daily selection of the best live music. It is a cool spot tucked away in Dagoretti Corner, Karandini Rd, just off Naivasha Rd. 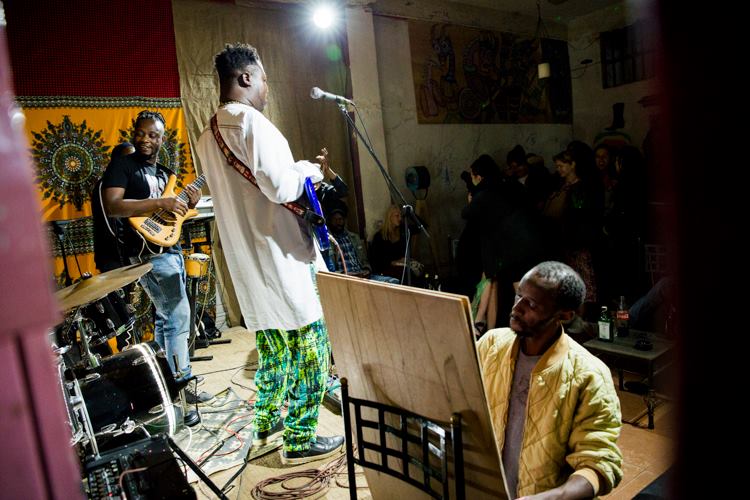 The most striking thing you will notice with Dagoz is its stunning khanga backdrop at the stage.  There is a live artist who is busy curating a mesmerizing piece of art as the music plays on. The alluring wall art that is also close to the stage, is always eye catching.

Dagoz doesn’t attempt to be categorised among the infamous busy spots of Nairobi; where waiters keep asking would you like to order now? Are you alright? Do you want another round? Every 2-3 times in a span of one hour.

The atmosphere, albeit cramped, feels like a funky living room. If you want to get a seat I recommend coming early. It is a small space and it gets pretty packed. People wander in from the street at times, every alcove of standing room is sometimes taken.

There is some sonic pleasure of listening to music at such close proximity. The music always feels acoustic and unplugged; in just the right ways. Dagoz offers handcrafted evenings, making it a great place to go in, no matter who is playing. Dave Otieno or Stevo Kiwinda, the co-founders, are always there making sure all is well and customers are enjoying their time. 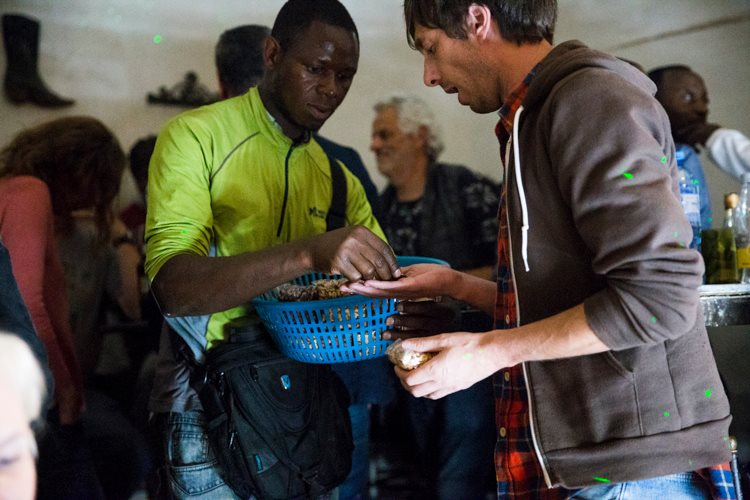 Just like your usual estate bar, you can never escape the conversations with the other elbow-close customers. You can down your beer comfortably after enjoying some Kenyan delicacies like Ugali and choma fry as there is a butcher just outside the venue.

At Dagoz, you will find performances from across all genres. It has a jive atmosphere; you will have a tingling feeling to get yourself on to the dance floor.

Dagoz is an ideal spot for those who find pleasure in discovering new music. The area is home to an astonishing number of lovely musicians.

My first time at Dagoz was on ‘Acoustic Wednesday’, performances by the charming Achieng ‘Ach13ng’ Otieno and Brian Sigu. I was lucky to catch Ach13ng’ performance. I felt like I was in a lounge room and there was a performance by a perfect stranger who is full of wit and intervention. Ach13ng’ has a rare ability to engage directly with her audience through anecdotes and conversation.

I went again on a busy Saturday night. The band at the time was Kombo Chokwe and Afrosimba band. 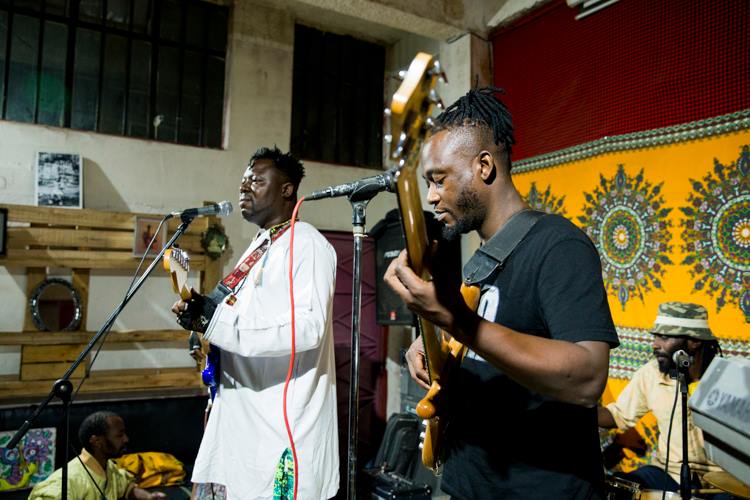 My time at Dagoz demonstrated that live music especially folk music is very much alive and well in Nairobi, not only with local musicians, but also with a knowledgeable and open-minded audience.

The birth of Dagoz Bar, Nairobi 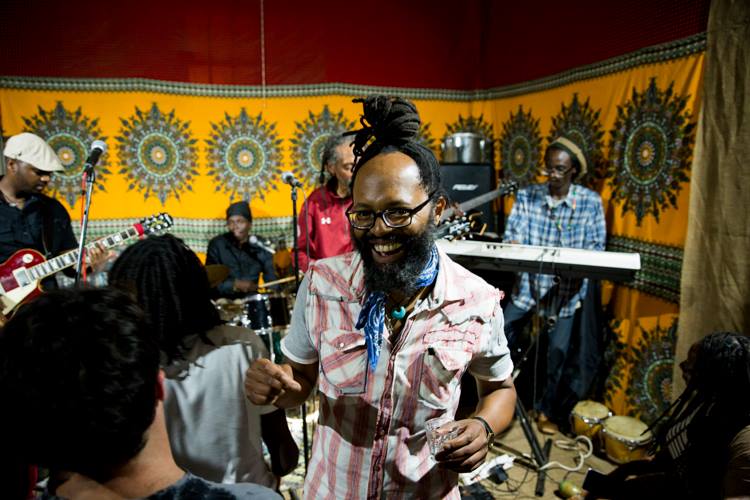 Dave Otieno and Stevo Kiwinda, the co-founders of Dagoz- Artist Venue, have been friends for a long time. They are both musicians who used to jam together back in the day. Steve worked at a UK jazz club scene as a book-keeper, and was always thrilled how such tiny spaces are ideal for musicians to express their music to an engaged audience.

Stevo Kiwinda was greatly influenced by venues like Ronnie Scotts and Chelsea 606 club. It didn’t come as a surprise that after 11 years after his return to Kenya, he felt an urge to curate a unique space that artists would appreciates and music lovers alike.

The idea for the Dagoz came, after a few jars of beer on the 31st Dec 2017. Stevo, one of the founders of Dagoz, describes it well, “We just had a few beers with Dave and we spoke about how it would be lovely to set up a live music venue in Nairobi.” Great ideas are always hatched up on a night out.

As fate would have it, Stevo got a call from Joshua, the butcher, next door at the bar (which is Dagoz now). There was a vacant spot, if Stevo and Dave are interested they should come quick and have a look. Stevo and Dave did not hesitate to seize the moment. They immediately gave a nod to get the space and secured the spot with the owner.

The venue has greatly relied on social media to get their word out on their special nights.  “We didn’t think anyone would come along, but we had a full house on the first night.” Says Stevo. After their opening night, it has been magical seeing people flowing in and having a great night at the space.

The Super Friday Question with 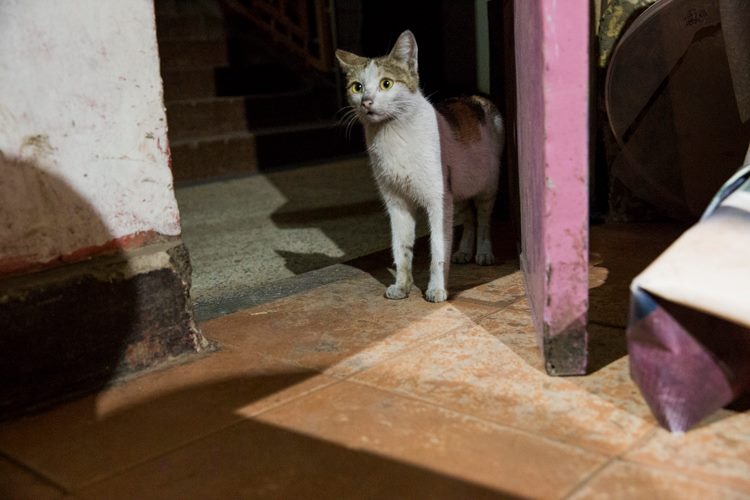 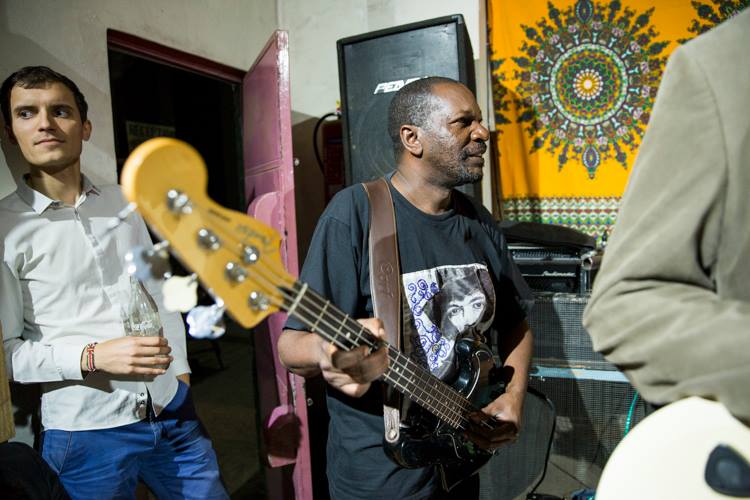 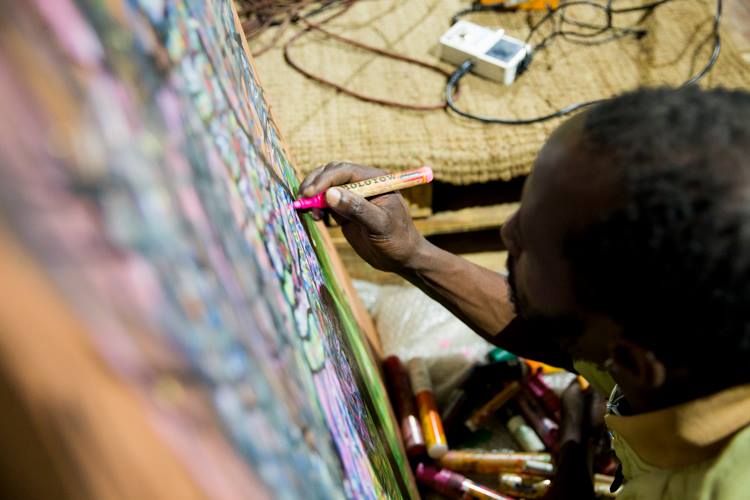 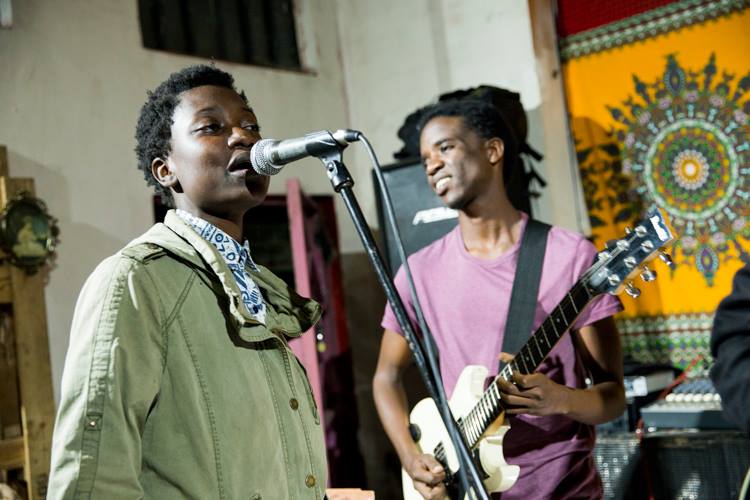 I totally missed this….do let me know when the next one is happening

For sure I will.

However, I have put a guide list in the article, when you feel like dropping by Dagoz it is easier to pick a date.

Thank you so much.

I am happy to have helped you identify a spot you can enjoy listening to music. 🙂

Thank you so much.

You absolutely should schedule in a date to visit the venue.

Dagoz is like a funky living room. I totally felt this the last time I was there. You described the place perfectly

[…] this ‘gem in the rough’ kind of place. The reason I refer to it as such shall be apparent soon […]