David Otieno Ralak, is a Nairobi man fully conscious of his extraordinary talent.

He isn’t one to waste words, neither does he waste any describing the music he plays and enjoys listening to.

Soft-spoken, sincere and earnest in his conversation, Ralak is now finding himself at the top of the nation’s long list of favorite maestros. “Years invested with teachers, mentors, masterclasses and self is paying off”.

David Ralak is one elusive gent. There’s been much talk about him – his pioneering role with the Kenya National Youth Orchestra, Nairobi String Quartet; the only string quartet in the East African region and his orchestral leadership role and most of all his fantastical music imagination; performance brilliance and fine playing on violin.

He is a man whose brilliance on violin has enabled him to play across various stages around the world such as Chineke Orchestra at London’s Royal Festival Hall, Dar Choral Society, Nairobi Orchestra, Safaricom Youth Orchestra and Kenya Music Conservatoire.

David steadily devoted an afternoon to this scribe, it was rewarding visit, I got to learn more about him, he is quite a guy to sit around and chat with. After a casual studio tour, he prepares a chilling elegant glass of gin and tonic, as we pitch ourselves at his philosophical space on the balcony for its chill ambience

The ideas of Ralak awaken the kind of attention that moves a mind to think for itself. I talk to many people and I am rarely stimulated as by a talk with him. Whether one agrees with his points or not, he admits he has reached a point in his life he must make a stand. “what I am doing is trying within the limits of my ability to develop my capacity, I believe I have done a lot of things that haven’t been done, at least to the extent that I am doing them. “ 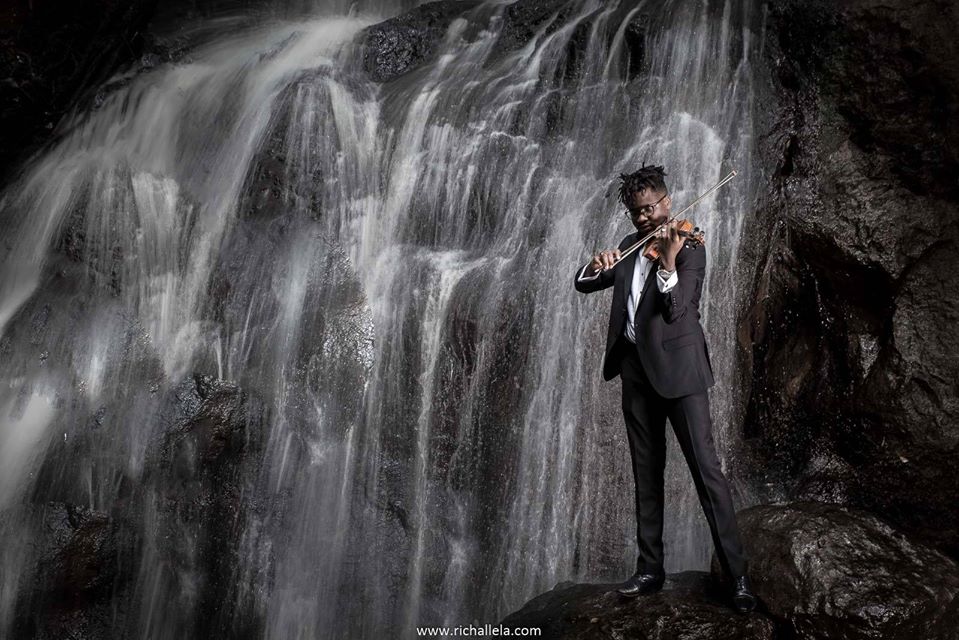 The making of the virtuoso violinist

David Ralak was born in August 18 1992, in a close niched family with three siblings. It is interesting to note; he doesn’t hail from a musical family background. “I am a smart kid, I loved playing a lot.” “My mum is a Primary School teacher and my dad is an accountant. I believe I borrowed something from my parents when it comes to music business and the way I teach my students – I am very organized in how I do stuff” he giggles as he adds his remark. “I wasn’t musical, I never picked up or showed any interest in music as kid”.

At the age of 14 years, he joined Booker Academy Secondary School, in Mumias “I was into sports, I was playing basketball and stuff” he snaps his fingers in a moment of reminiscence, “It was here I picked up my very first instrument, which is the recorder, I am actually not bad, I picked the clarinet hmmm not bad, then I joined the band, I was playing the guitar, then I played trumpet. I was the band leader and choir master. I played saxophone for most of my high school life”.

It was in his third year in high school, the school acquired two violins. “Our high school teacher, Mr. Apollo, got two violins and brought them to school.  All I remember is that as soon as I picked it up, I couldn’t put it down. It was like, I was possessed, until today I can’t stop myself”.

“The first day I picked the violin I played a hymn, ‘When Peace Like a River’ my involvement with the choir, I knew solfas very well” Ralak enthusiastically proceeds to hum the solfas for the hymn. 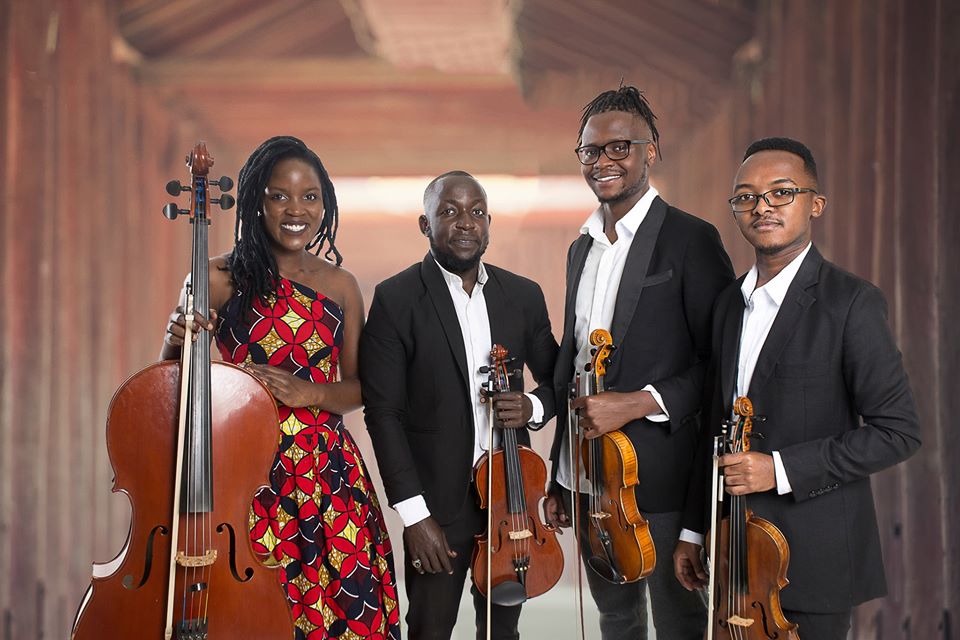 After his high school tenure, he came back to Nairobi and was eager to join a space that would allow him to play the violin. His first mission was to acquire an instrument, “There was a guy known as Brian Luvasi, he helped me with a violin. I am grateful to that man”. However, after a while he managed to acquire his own violin.

He enrolled at the Kenya Music Conservatoire, “I met Mr. Kinyanjui who directed me to Mr. Atigala Luvai and I joined music lessons, learned a lot from this space.”

Ralak began his initial violin studies under a fellow Kenyan, Cynthia Mungai, and has studied Dzenisa from Bosnia; remarkable Polish violinist Marta Lizak, and Malgosia Ziemkewicz Artabe. Moreover, he has been privileged to participate in masterclasses from professionals’ musicians from all around the world, including Swedish violinist Kristina Ebbersten, and violinists from the famous Italian quartet, Quarteto Aqua.

He had other high musical experiences when he attended the Musicale Summer School programme at St. George’s Harpenden in the UK, as well participating in the Ravenna Festival under Maestro Ricardo Mutti (1) – (scokendia, 2014)

As luck would have it, in 2010, the classical music appreciation was booming. “To be honest, I was at the right place at the right time, KNYO was being launched, I was among the pioneer members. We did the Classics Go Down Gig, Safaricom Classical Fusion playing with along Lady Smith Black Mambazo and Soweto String Quartet.”

In 2011, David joined University of Nairobi to study Agribusiness Management. He candidly admits, he lost track of his academic stamina, by the third year, music career had taken over his life. “Money started checking in, I had no responsibility – I kinda fucked up, yeah.”

“A lot of the business elements I implement now, I got some of the ideas from university.” David got to work with Brian Sempele, and attending master classes in Europe and around the world. All these experiences opened up his world view on having a quartet of his own. He got together with his three friends –Ken Mwiti, Masala Sefu and Emmanuel Nacheri to believe in his dream to launch a unique ensemble – Nairobi String Quartet.

“We are musicians trying to make a living like anybody else, I enjoy that we sell out shows. I am most proud to pay my members equally. “

He explains to me how classical music and violin became a muse for him.

“The first classical piece I listen to was Four Seasons by Vivaldi, I listened to it, I was sold. I was like, shit! This is impressive, if a human being is doing it, I also want to do it. It sounded so surreal.

“My personality, I like difficult things, I like proving myself to be great. By picking violin, I knew this was a challenge, not just for me but for everyone. When people tell me I can’t do it, that’s jet fuel to venture into that – that’s where I will go”.

Small talk irks Ralak. He is no tin god and he has his own faults like all of us, but he isn’t the kind to bellyache about social issues like racism and colorism within the classical scene unless they directly affect him.

There is a sense of pride that come with playing with the various classical ensembles in Nairobi, he adds on to say, “You know we are not paid to be in the orchestra, yet we are so proud to play”. 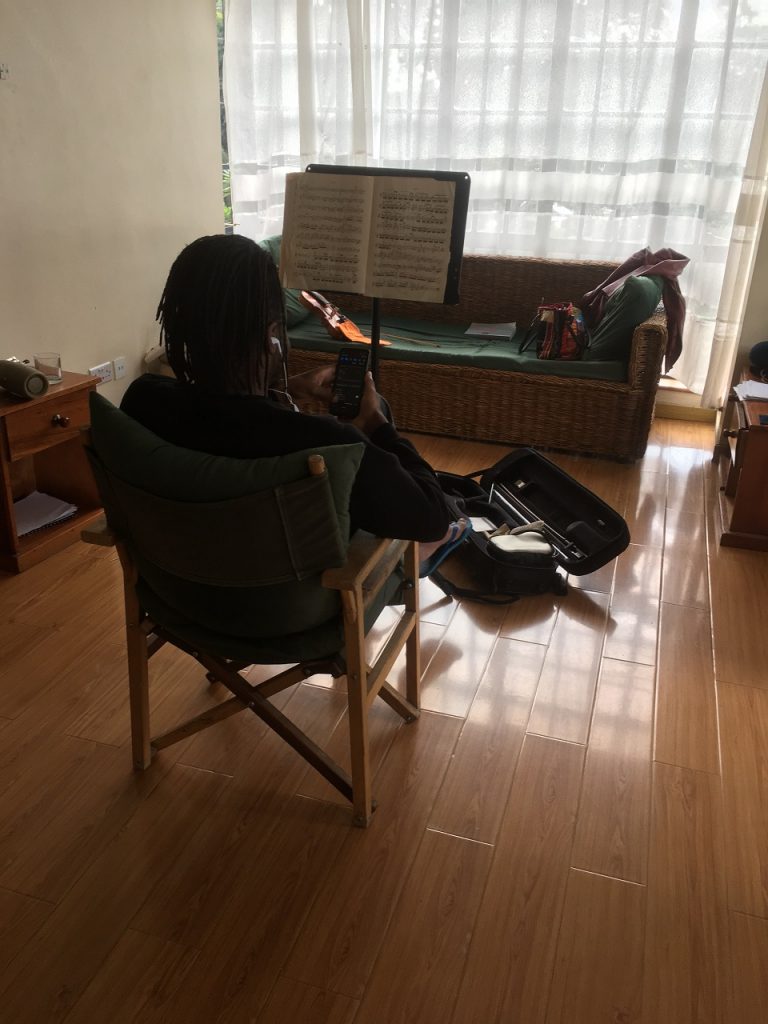 David Ralak at his home studio on a virtual session

I asked about his main motivation to give up so many things – public eye, teaching, materialistic items possibly a great deal of money – just to divide his time between music performance and little teaching. “I reached a stage in my life, I need to chill down and work on my violin, I was becoming too comfortable at it. I am working an average of 6-8 hours nonstop, no distraction harnessing my craft on violin”.

For now, David enjoys the little pleasures of teaching violin two section, with 17 students with the Safaricom Youth Orchestra virtually.

At 27, Ralak is a calm, young man whose future seems assured. He is a magnetic figure; he has no wish to be hailed as a king of violin. He is unquestionably the surging vitality and exuberance that we need.

“I am not established, if anything I am just doing my thing, I am only beginning.”